His name is Gil, he’s over 50 feet tall, and he comes bearing good news. Say hello to LG’s newest mascot, a “Good News Ambassador” whose furry features adorn a state-of-the-art, five-story-high LED billboard that wraps around the corner of 45th and 7th Avenue in New York’s famous Times Square. 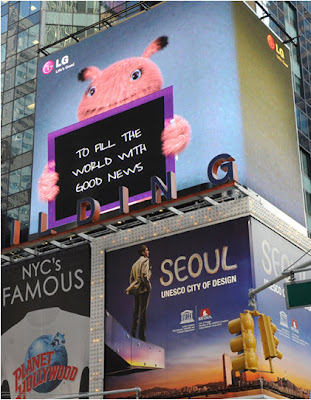 Gil, LG’s new Good News Ambassador, smiles down over Times Square in New York.
LG unveiled the Good News billboard at a special event held on the ninth floor of the Marriott Marquis and attended by LG executives from the U.S. and Korea. Staying true to its message that “Life’s Good,” LG will use the billboard to disseminate good news. Passers-by will also be able to text or tweet their own good-news stories to the board, and see their names up in lights above one of the most famous plazas in the world. 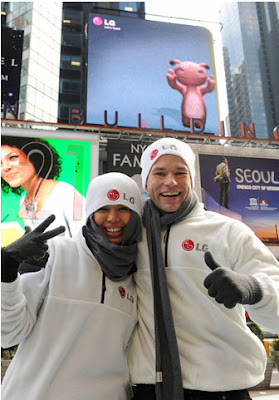 Two LG staff pose for the camera in front of the new LG billboard. 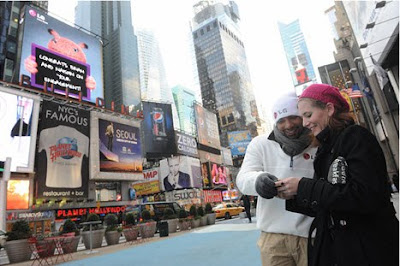 Passers-by can text and tweet their own news to the board and see their name in lights high above Times Square.

To mark the occasion, New York Mayor Michael Bloomberg declared December 14 “LG Good News Day.” The campaign promises to deliver a major boost to LG’s profile throughout the U.S., with the billboard taking pride of place in one of New York’s most iconic landmarks. 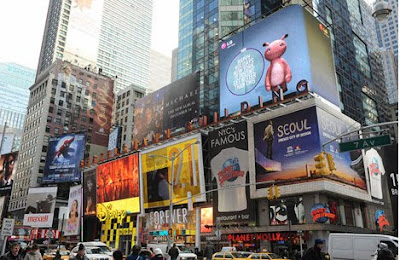 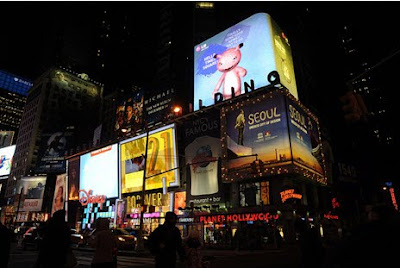 … and by night.
Gil’s huge, pink frame literally lit up Times Square on the night of the ceremony. At 4,200 square feet, the LG Good News billboard is the largest LED screen in Times Square, with a resolution of 1984×1136 and a 10,000 Candela brightness. Its front and side screens connect seamlessly on the corner, providing throngs of passers-by with an amazing spectacle. 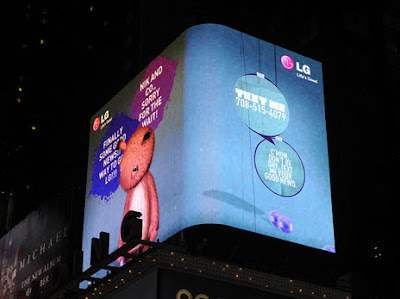 The display’s front and side screens connect seamlessly.

Even on the coldest nights in New York City, Gil will now be warming up onlookers down below by reminding them of LG’s simple message: Life’s Good.