Can you imagine watching Jaws in 3D without the music? (Remember this music?) I think we can all agree that it just wouldn’t be the same movie. The sounds go hand-in-hand with the sights and, especially with this kind of gripping 3D drama, the music is vital to getting the 3D effect just right.

And that’s exactly why companies like LG are working hard to develop 3D sound technology. You’ve heard about 3D images but not sure what 3D sound is, right? Keep reading to find out what 3D sound is all about and why it’s really turning heads.
Just for a second, think about why we have those great sound experiences when we’re at the movie theater. When you’re watching an action movie, for example, you can literally hear bullets whizzing past your ear, individual raindrops hitting the roof overhead, or even the faintest of whispers off to the side. The auditory effect in concert halls and opera houses can be even stronger. Why? 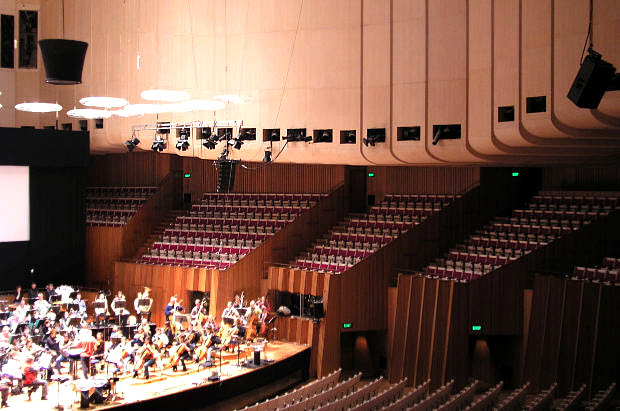 In fact, these spaces are specifically engineered to deliver the ultimate sound experiences to the audience, with carefully crafted acoustics prepared to bounce the sound in precisely the right directions to amplify and qualify it. These sounds travel across the entire hall, allowing the people to experience rich music coming from all different directions, whether at ear level, or from above their heads.
At home, it’s difficult for a TV to compete with the experience of a movie theater or live concert hall because if you’ve only got two speakers, all those individual sounds are mashed together and sent out in the same direction. You also don’t have the unique ambiance of the theater delivered by those wonderful acoustics.
In an opera house, if everything is quiet, you really can hear if a pin drops.
Home theater systems make a great start at recreating this experience at home, especially because they begin with multiple channels. Ten years ago, 2.1 channels were common, giving you two speakers and a sub-woofer for the extra bass. Now, 5.1 channel systems are becoming common, and even 7.1 channel systems are appearing. As sound recording technology improves, the ability to deliver true 3D sound to consumers at home is here.
Are you getting a better idea of what 3D sound is? Sound is already three dimensional and even people with 5.1 channel home theaters appreciate its great surround sound effect. But, as outstanding as they are, 5.1 channel systems can’t deliver sound coming from over the top and this is precisely why LG has developed the truly innovative 3D home theater system, to fill out those upper levels of sound.
LG’s cutting edge CINEMA 3D SOUND Home Theater System takes the major advances of all-in-one multichannel systems and pushes them to a higher level, literally. Using truly innovative technologies such as LG’s Sound Field Expansion and 3D Sound Analyzer, the system takes the home out of the home theater, and take you directly to the middle of the scene. It works with a special 3D reflector in the four upright 3D speakers, much like the reflector system in opera houses and concert halls. This reflector bounces the sound upwards in multiple directions to create a dome of sound that fully envelopes you.
Now, instead of just hearing sound coming straight at you or even from behind as with conventional home theater systems, the CINEMA 3D SOUND Home Theater System also drives the sound from multiple angles overhead. It creates a new dimension of sound coming from above.
We’ll be covering more about LG’s CINEMA 3D SOUND Home Theater System in the next post, and you won’t be disappointed. You have to see…er… hear it to believe it.