LG CINEMA 3D TV is grabbing the attention of not only early adopters but media and general consumers as well with its significantly upgraded technology. Conventional 3D TVs can’t even compare. LG CINEMA 3D TV takes 3D technology one step further with a technology called Film-typed Patterned Retarder, or FPR. This technology delivers more natural and vibrant 3D images by applying the closest possible method of how we actually perceive three-dimensional effects. LG CINEMA 3D technology is successfully moving away from conventional 3D, bringing forward the next generation in 3D TV viewing.

Today, let’s delve into the difference between the LG CINEMA 3D TVs and conventional 3D TVs.

But, LG CINEMA 3D TV is free from flickering and crosstalk, and is so much easier on your eyes. Unlike conventional 3D TVs, LG CINEMA 3D TV uses an advanced technique that places a special polarized film on the TV panel itself rather than using the old shutter method. LG CINEMA 3D TVs have been certified by TÜV and Intertek as the world’s first Flicker-Free 3D TVs. 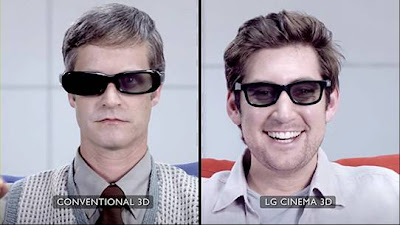 3D TV (SG Type) glasses were heavy for technical reasons. Because the glasses have to receive visual transmissions from the TV, they require a separate device to receive the signals. They also need batteries, which of course makes them significantly heavier. Even slightly weighty regular glasses are uncomfortable after a certain amount of time, and the 3D glasses weigh much more than those. Watching TV with such heavy glasses can get very uncomfortable after a long time, and who really wants that when watching TV?

LG CINEMA 3D TV glasses, however, weigh less than half the weight of conventional 3D TV glasses. The main difference is that, with the FPR, there is no longer any need for signals to be sent back and forth from the TV to the glasses, meaning that the glasses are completely free of electrical parts or batteries. On top of that, LG even developed clip-on lenses for consumers who wear prescription glasses. In this way, LG CINEMA 3D TV enables perfectly comfortable viewing experience, which is of course what watching TV should really be like.

Most of you may have experienced that sometimes when watching 3D images, the same content may seem darker compared to 2D images. This happens in conventional 3D TVs (SG Type) that use constantly flickering shutter glasses, which also have black panels to resolve image blurring. In conclusion, both the 3D TV monitor and the glasses make the original image darker than it really is.

But, LG CINEMA 3D TV shows brighter 3D pictures. Furthermore, with 3D Light Boost, which is a thin film that is attached to the panel, the light from the backlight unit is maximized, delivering images that are almost 2 times brighter than conventional 3D TVs. 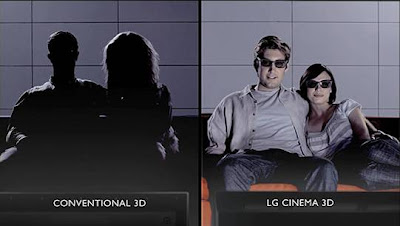 Another downside of conventional 3D TVs is that when people watch, they have to sit in an upright position. Because the TV and glasses had to constantly communicate with each other, turning the angle of the glasses would interrupt the signal and that would affect the 3D images.

On the other hand, CINEMA 3D TV with FPR technology does not require the TV monitor and glasses to send signals back and forth, so you can enjoy watching 3D content lying down or leaning back on the couch! The flexible viewing positions in other words mean that you can comfortably enjoy watching 3D TVs in any angle or position. For example when you’re watching 3D TV with your friends on conventional 3D TVs, everyone had to gather around the center to watch properly. But with LG CINEMA 3D TV, everyone can relax and experience pleasant 3D TV viewing. 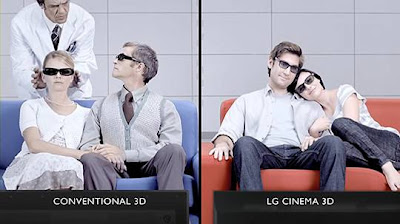 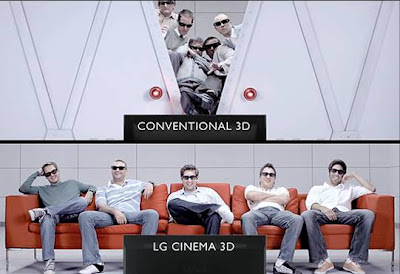 So far, we have observed the differences between the conventional 3D TVs and LG’s CINEMA 3D TV. Let’s summarize them into a simple chart. 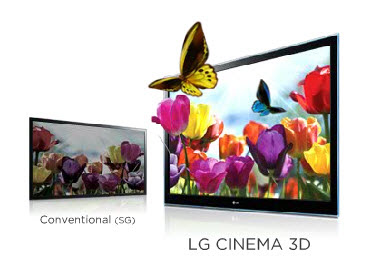 As you can see, the LG CINEMA 3D TV is truly the next generation 3D TV. It has made up for the many shortcomings of conventional 3D TVs, and perfected the realization of 3D images. With revolutionary FPR technology, the CINEMA 3D TV has taken a step closer to a future that includes glasses-free 3D TV technology. With the most improved technology, the LG CINEMA 3D TV is the most advanced 3D TV available on the market today and it’s coming soon to Malaysia! And, there is no doubt that it has brought real 3D home entertainment to consumers.