The 50th IFA recently wrapped in Berlin, with a display of high-tech gadgets and gizmos that demonstrated just how far this electronics tradeshow has come. Beginning way back in the 1920s, IFA grew from an expo for radio technology to include TVs, home appliances and information technology, elevating it to its current status as one of the biggest and best electronics tradeshows in the world. 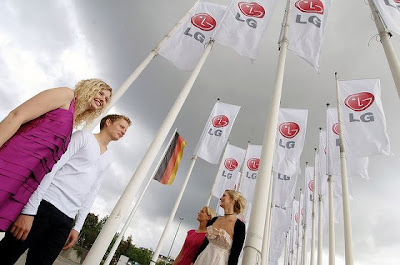 LG Flags in front of the main hall

Expectations were running high leading up to the show, which this year ran from September 3 through 8. As the big days approached, a series of flags, including LG’s, were arrayed in the streets around Messe Berlin, building excitement in the German capital.

At the event itself LG showcased over 800 state-of-the-art electronics products – including LED TVs, SMART TVs, washing machines and network monitors – many fitted with LG’s most eco-friendly technologies yet. Two of the biggest stars of the show were the LEX8, LG’s new NANO FULL LED TV, and a 31-inch, 0.29cm-thick OLED TV. Both debutants at this year’s IFA, the two TVs’ beautifully advanced picture quality drew audible ripples of enthusiasm from crowds of passersby. 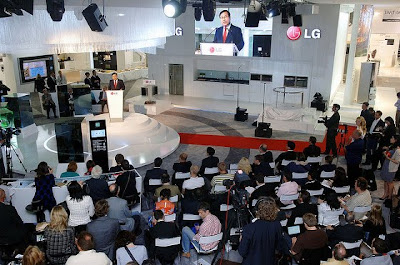 On September 1, two days before IFA officially opened, LG Home Appliance (HA) Company held a press conference to introduce its latest products to an audience of more than 150 journalists from around the world. At the HA booth, the reporters heard Young-ha Lee, the President and CEO of LG HA Company, talk about LG HA’s four core technologies – the Inverter Direct Drive™ in its washing machines, the Linear Compressor in its refrigerators, KOMPRESSOR Technology in its vacuum cleaners and Lightwave technology in its cooking appliances. They also learned more about HA’s range of “smart” devices including the Hom-bot, LG’s robotic vacuum cleaner, which especially piqued the interest of the gathered media.

Every IFA sees a few themes dominate the show and this year was no different. With all electronics companies keen to push their green credentials, eco-friendly products were on show near the entrance and many advertising spaces were swathed in green. Retaining a hot streak that began with this year’s Consumer Electronics Show, 3D technology was again at the fore, with 3D Michael Jackson concerts and soccer games from this year’s World Cup enthralling visitors. Smart products, too, gained a big foothold at IFA, with visitors keen to discover the potential for convergence among phones, digital devices and now Smart TVs. 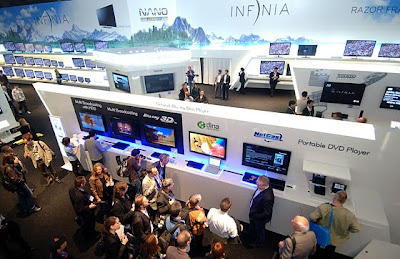 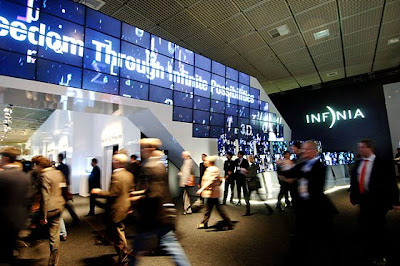 For sheer picture quality, there was little to touch the LEX8. Unveiled at IFA, the LEX8 uses LG’s proprietary NANO Lighting Technology to produce a strikingly realistic picture on what is the world’s slimmest FULL LED TV, at just 1.25cm thick.

The LEX8 is fitted with improved localized dimming through its Micro Pixel Control, which manipulates individual LED blocks to produce a wider, deeper range of color. The TV’s TruMotion 400Hz delivers a super-fast processing rate to ensure the picture is also practically blur-free in both 2D and 3D. LG has big hopes for its new TV, and the response at IFA suggests they have a winner on their hands. 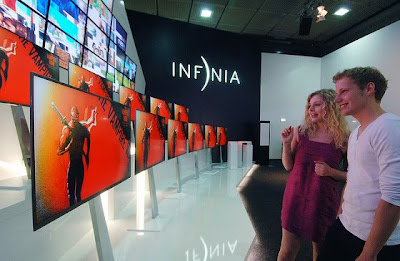 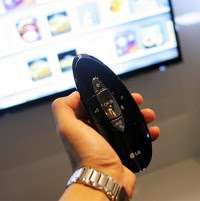 Also debuting at IFA 2010 was LG’s version of Smart TV, the internet-linked sets that promise to revolutionize the way people watch TV. Running on NetCast 2.0, LG’s own smart TV platform, LG’s SMART TV aims to greatly increase viewing options while making TVs easier than ever to use. A key part of this is the Magic Motion Remote Control, which lets users to move an onscreen cursor to whatever option they want and then select it with the simple click of a button.

Visitors to LG’s booth saw a selection of the prototype SMART TV’s apps, which will offer specific categories of content – entertainment, education, news, health – on apps that are scheduled to go on sale at LG’s own app store sometime next year. The company is currently working to establish partnerships with some of the world’s top content providers, to ensure LG’s SMART TVs have a rich choice of content when they hit the shelves. As visitors discovered, that content won’t just mean more movies and TV shows, but a host of fun and practical applications, too. Using the Magic Motion Remote Control, kids will be able to use onscreen coloring books, while other viewers will be able to learn first aid tips or even take interactive yoga classes. 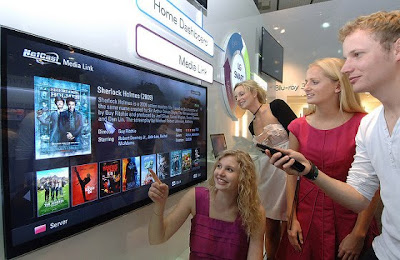 LG also showed its ongoing strength in OLED technology with a 31-inch OLED 3D TV. At 0.29cm thick the slimmest OLED TV in the world, the new set brings 3D capability to the OLED’s stunning picture, which has some of the deepest blacks ever seen on a TV. A Detailed Grey Scale and Infinite Contrast Ration ensure the TV can project all existing color levels, while a Wide Color Gamut and No Color Gamut Shift mean users can watch the TV under any viewing conditions and from any angle. 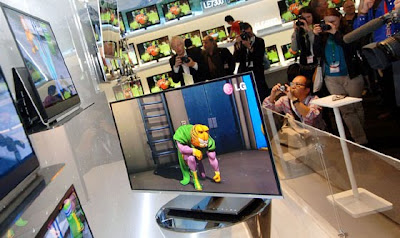 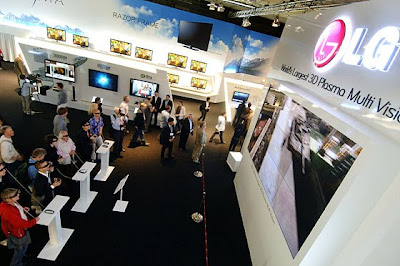 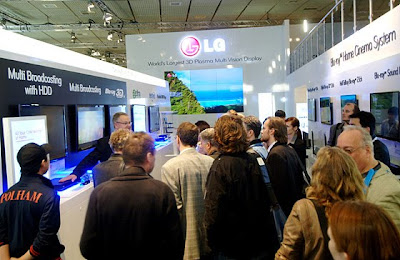 Shopping bags emblazoned with the LG logo were ubiquitous at this year’s IFA, showing just how many people had stopped to take a good look around the LG booth. Once again, LG lived up to its reputation as one of the world’s edgiest, most forward-thinking electronics companies, with a range of products that took entertainment and home appliances in exciting new directions. It may be 12 months off, but next year’s IFA now looks more exciting than ever.